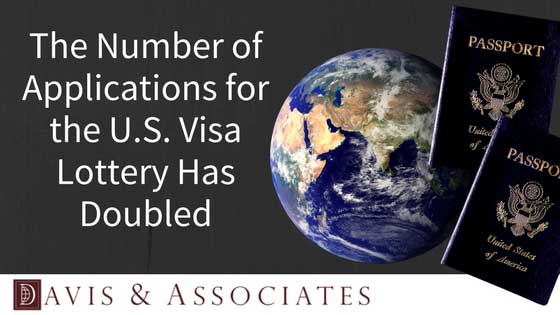 The American Visa Lottery, a program that has been unique in the world, may be in danger of being eliminated by certain bills under consideration in Congress. The program, originally begun in 1995, has attracted around 156 million applicants from scores of nations during the past decade, according to a Pew Research Center’s review. During that time, applications for permanent residency or Green Card have grown from 9.1 million in 2007 to 19.3 million in 2017.

What is the American Visa Lottery?

The Visa Lottery was established to increase diversity in America by expanding availability to individuals who seek the “American Dream” from nations that have been underrepresented in the United States. The intent of the program is to help educated and motivated individuals with no prospect of success in their own countries to have an opportunity for themselves and their families in the United States.

Citizens from nations like Mexico, Canada, India, and China are not eligible to participate in the visa lottery since applicants from these countries make up most of the permanent resident and work visa populations already.

The result of the American Visa Lottery program has been that 5% or 50,000 of the approximately one million legal immigrants who are awarded green cards annually are from among those diversity account applicants. The American Visa Lottery program has demonstrated relative balance in the diversity objective in that visas have been awarded annually to 20,000 African citizens, 20,000 Europeans, 8,000 Asians, and about 2,000 from the Americas outside of Canada and Mexico.

Whole continents are assigned a quota of awardees. To maintain the diversity balance, once the quotas for particular nations fill up, no more applicants will be considered during that year.

Qualifications for Applying for the American Visa Lottery

The United States State Department has established necessary criteria for individuals to be awarded a green card in the lottery program. These requirements relate to education and work experience to qualify.

Also, the applicant must undergo background checks, health screening, and stringent interviews before a visa can be allowed.

Submission of proof of meeting these requirements is not necessary at the time of application. However, the applicant must provide evidence before applying for permanent residency.

Why Has the Number of American Visa Lottery Applicants Grown So Much? 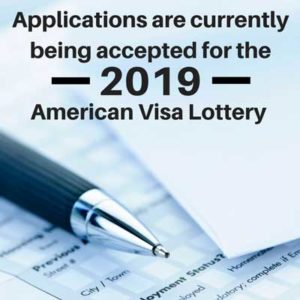 Applications for the visa lottery in the United States has risen steadily since 2015. The political tone in past months regarding immigration has turned negative, particularly during the 2016 Presidential election. Campaign promises and initiatives to limit immigration and accelerate mass deportations have created confusion and unease among current green card holders and created a sense of urgency for hopefuls.

Additionally, President Trump’s executive order early in 2017 restricted admittance of individuals, regardless of their visa status, from six predominantly Muslim countries has added to the uncertainty.

As a result, current citizenship applications have also increased since citizen status eliminates the possibility of deportation.

Visa Lottery applications have risen mostly due to the anticipation that the program may disappear sometime soon. Qualified individuals without family ties or employers to sponsor their residency who seek a fresh start to improve the quality of life would no longer have even the narrowest of chances to achieve their own American Dream.

What is the Future of the American Visa Lottery Program?

Applications are currently being accepted for the 2019 drawing.

Members of both parties of Congress, however, continue to support the American Visa Lottery and the diversity the program embodies. The program involves a relatively small number of individuals when compared to other permanent residency opportunities.

With today’s current slate of critical priority initiatives such as healthcare, tax reform, and budget development, the program may survive in the very near future. Bills that have been introduced in recent months to eliminate the visa lottery have been attached to other legislation that has failed.

So the visa lottery remains, for now.

For questions regarding the American Visa Lottery or any other permanent resident or citizenship requirements, consult an experienced immigration law firm. In Dallas, the award-winning firm of Davis and Associates cares about individuals and families and is committed to protecting the rights of all residents or soon-to-be-residents of the United States.