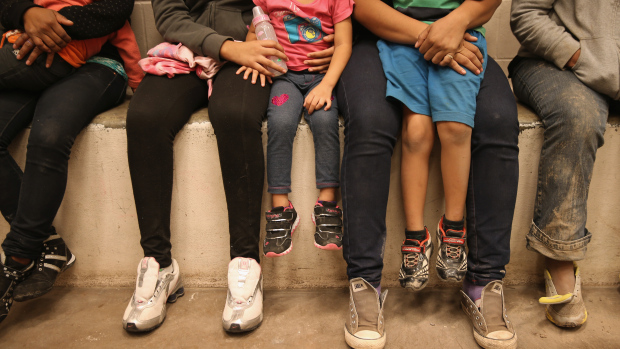 The summer of 2014 saw a surge of women and children from Central America rushing into the United States, seeking asylum from raging violence in their home countries. This caused federal immigration officials to reconsider their stance on family detention.

This fresh perspective resulted in the construction of the largest immigration detention center in the country. The facility, built by U.S. Immigration and Customs Enforcement, is designed to hold up to 2,400 undocumented asylum-seeking women and children just southwest of San Antonio in Dilley, Texas.

“Medical professionals monitored approximately 250 children at the South Texas Family Residential Center who, over a five-day period, inadvertently received an adult dose of hepatitis A vaccine rather than a pediatric dose,” Nina Pruneda, an ICE spokesman, says in a statement.  “No significant adverse reactions occurred. Parents at the facility were advised and counseled by medical professionals about potential side effects, with services made available in multiple languages. ICE, in consultation with DHS’s Office of Health Affairs, is conducting a thorough review of the circumstances that led to this event and will make all necessary changes to prevent similar occurrences in the future.”

An ICE spokesman told the Associated Press that the children were monitored for potential side effects, and that none required further medical treatment. However, Barbara Hines, an attorney who visited the prison last week, said in a written statement that she met with a mother who complained that her 4-year-old child “was feverish, not eating, having trouble walking and complaining of pain in his leg.”

The facility is operated by the Corrections Corporation of America, which has benefited greatly from the recent surge of illegal immigrant crossing the border.

Crystal Williams, executive director of the American Immigration Lawyers Association, described a disturbing environment at the prison: ..“children have been forced to sleep with the lights on, are subject to intrusive checks regularly throughout the night, and have been dragged from their beds at 4 a.m. to be given shots while their mothers must stand helplessly by without being told what is going on or being allowed a say in the matter.”

“Private prisons cannot care for families and these facilities must be closed,” said Hines.