If you’re in the United States illegally – meaning you came to the country without proper documentation – you face serious penalties if immigration authorities catch you. In fact, you could be deported and barred from re-entry, which means you can’t come back to the U.S., even if your family is here and you’re a foreigner in your country of origin.

However, there is help for undocumented immigrants in the United States. You may be able to get legal status that keeps you in the U.S. with your family and friends.

Help for Undocumented Immigrants: Getting Legal Status in the U.S.

Undocumented immigrants – sometimes called “illegal immigrants” – don’t have many options for lawful permanent residence. U.S. immigration law is very clear about following the proper channels when visiting or moving to the United States.

Most undocumented immigrants (62 percent) are present in the U.S. after overstaying a visa, although about 38 percent had illegally crossed the northern or southern border. Regardless of how you arrived in the United States and whether you had a visa, the results are the same: Being unlawfully present in the country is grounds for deportation with a bar to re-entry.

What is a Bar to Re-Entry?

If U.S. customs officials discover that you have been unlawfully present in the United States, no matter how you came to the country, you can be barred from re-entry. While there are some exceptions, such as those for asylum applicants, battered women and children, and victims of severe human trafficking (as well as exceptions for minors), most people will be banned from coming back to the U.S. for at least 3 years.

Aliens who were unlawfully present in the U.S. for between 180 days and 1 year, but who left voluntarily, are subject to a 3-year bar to re-entry.

Aliens who were unlawfully present in the U.S. for 1 year or more, but who left voluntarily, are subject to a 10-year bar to re-entry.

Aliens who were unlawfully present in the U.S. for 1 year or more and were subject to a 10-year bar cannot try to re-enter the country illegally. If a person tries or succeeds at coming back to the U.S. illegally, he or she is subject to a permanent bar to re-entry. 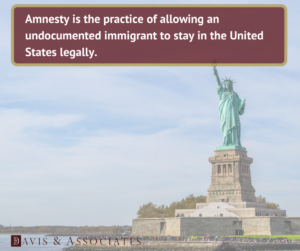 You can apply for asylum in the U.S. if you qualify, as long as you apply within a year of your entry or the expiration of your authorized stay. (If you entered the country on a valid visa that expired on March 15, for example, you must apply for asylum before the following March 15.)

In order to apply for asylum, you have to show that you’ve been persecuted – or that you fear future persecution in your home country – based on your religion, race, nationality, political opinion or membership in a certain social group.

You could be eligible for temporary protected status in the U.S. if you come from a country that’s recently had an environmental or natural disaster, a civil war, or any other issue that makes it unsafe for you to return. Temporary protected status, or TPS, doesn’t lead to a green card, and it’s only good for up to 18 months. However, you can receive a work permit and explore other options toward a more permanent status during the time you’re in the U.S.

Some people who are arrested by immigration authorities can qualify for cancellation of removal – but it’s not an option available to everyone. You can only use this option if you’re already in removal proceedings, and you only qualify for cancellation of removal if you:
• Have been physically present in the U.S. for at least 10 years
• Are a person of good moral character, and have been for at least 10 years
• Aren’t disqualified due to the commission of a crime or immigration violation, or because you have persecuted others

Prior Service in the U.S. Military as a Path to Citizenship

Why Can’t You Marry a U.S. Citizen?

In some cases, marrying a U.S. citizen can get you “immediate relative” status that makes you eligible for a green card. However, you can only take this route if you enter into a valid, bona fide marriage with a citizen – if you’re only marrying for the immigration benefit, U.S. Customs and Immigration Services will find out and you will be removed from the country.

Additionally, this option is only available to people who entered the United States legally on a valid visa. If you entered the U.S. illegally, your chance of being able to adjust your status is very slim.

Are You an Undocumented Immigrant Who Needs to Get Legal Status in the U.S.?

If you’re an undocumented immigrant who needs to know how to get legal status in the U.S., we may be able to help you. Call us today to set up your consultation with an experienced professional who can give you the legal guidance you need.