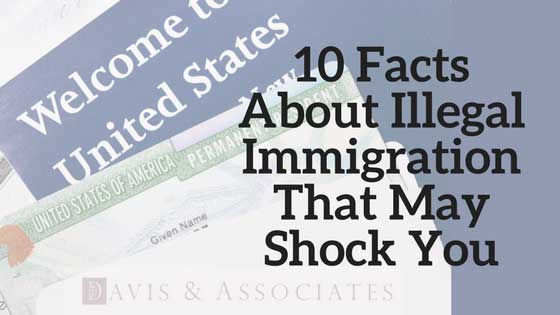 The 2016 political campaign in the United States included a significant amount of dialog about immigration and, specifically, unlawful or undocumented immigration. While some comments were factual, some have been proven false or at least a somewhat distorted interpretation of the truth. Here is more about immigration naturalization services and immigration law.

Typical comments about illegal immigrants have suggested that:

These comments have driven an executive promise to construct a wall across the southwestern border of the United States, a distance of approximately 2,000 miles.

What is an Illegal Immigrant?

Illegal immigrants are usually considered to be individuals who have “sneaked” across the border in the middle of the night without any authorization nor documentation from immigration naturalization services. While these people do make up a portion of unauthorized immigrants, the biggest percentage in the past decade has consisted of those who have stayed beyond the time limit of their legal Visitor, Work, or Student Visas.

Here are some additional statistics regarding the presence of unauthorized immigrants:

With the new administration, attitudes toward immigration seem to be evolving. The best solution for anyone who is unsure of their situation should consult a reputable immigration attorney to discuss immigration naturalization services. Besides stricter border control, authorities are adopting stronger measures for workplace verification. State governments, notably Texas, are adopting tougher procedures for checking on suspected undocumented immigrants.

President Trump’s executive order issued early in 2017 to halt travel to review and revamp immigration procedures was challenged in court.  While the order was aimed directly at six primarily Islamic nations, the process implies a stricter view of newcomers coming to and currently living in the United States.

Immigration practices and the rights of current residents seem to be tightening. The best course of action for any individual who feels jeopardized by should be to seek experienced and dedicated legal advice. In Dallas, the award-winning Davis & Associates Law Firm is devoted to providing the best immigration naturalization services.

Davis & Associates specializes in immigration naturalization services and residency-related issues. For a free initial consultation to discuss your personal situation,  phone the multi-lingual professionals at Davis & Associates in Dallas at 214.628.9888 or fill out the form below.