10 Things About Becoming A Naturalized Citizen in The United States

Many foreign-born people who have arrived in the United States to be closer to their families, apply their skills and education for more significant work opportunities, or have escaped danger in their home countries, have determined that they would like to remain and eventually become a naturalized citizen of the United States. Many individuals have been granted permanent resident status, while some others are more recent arrivals hoping to scale the ladder to eventually becoming a naturalized citizen.

According to the United States Citizenship and Naturalization Service (USCIS) Fact Sheet, over 7.4 million people were granted naturalized citizenship during the 10 years leading up to 2017. In fiscal year 2018 alone, 756,000 new citizens were sworn in as naturalized citizens, with all the rights and responsibilities granted to native-born U.S. citizens.

Many of those new citizens relied on professional guidance, support, and assistance to achieve full citizenship successfully. Experienced immigration lawyers like Davis & Associates in Dallas understand citizenship law entirely and can make naturalization a smooth and stress-free process.

For many, current attitudes of highly ranked government leaders against immigration, asylum, and deportation seem threatening and cause fear that achieving citizenship may feel like only a dream. However, for those who are already permanent residents and meet all other requirements for citizenship, the threat is minimal, particularly with the proactive assistance of an experienced immigration attorney.

People who have already reached permanent resident or green card status are no longer in danger of deportation unless they have committed a felony or other serious crimes that would jeopardize their residency. However, there are some cases in which people with green cards can have their permanent residency status revoked – and if you have received a notice of removal proceedings from U.S. Customs and Immigration Services, it’s probably a good idea to get in touch with an attorney as soon as you can. 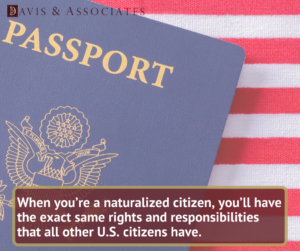 A naturalized citizen of the United States is a foreign-born individual who has met all the requirements of becoming a citizen as established by the Immigration and Naturalization Act (INA) passed by the U.S. Congress. The process for immigrants to become United States citizens is referred to as naturalization.

Once you have been awarded citizenship, you can enjoy all of the rights and benefits of a natural-born U.S. citizen. The rights to vote and receive government benefits as well as the ability to work, own a home, and participate in the political process will become a part of your normal life.

10 Things You Should Know About Becoming A Naturalized Citizen

If you want to become a naturalized citizen of the United States, these are the ten most important things you should know:

(1) Qualifications To Become A Naturalized Citizen Of The United States

In order to begin, the foreign resident needs to initially fulfill specific obligations. A quality naturalization lawyer will help in fulfilling these complicated requirements. Although there are exceptions in specific instances to be mentioned later, the starting qualifications for an individual to become a naturalized United States citizen are that you must:

Exceptions to the basic rules for naturalization include honorably discharged, foreign-born members of the United States military, as well as spouses, and children of U.S. citizens and U.S. military personnel.

If you’re serving – or if you have served – in the U.S. military, these points may apply to you:

(3) Spouses Of United States Citizens And U.S. Military Personnel Are Exempt From Some Requirements 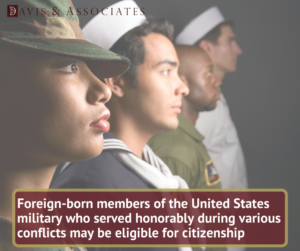 Some spouses of U.S. citizens and some U.S. military personnel are exempt from some of the requirements for becoming a naturalized citizen. For example:

(4) What About The Naturalization Of Children Under 18 Years Of Age?

In many cases, kids under 18 whose parents become naturalized citizens are automatically naturalized themselves. Sometimes, though, a parent must apply on behalf of his or her child. Here’s what to know:

(5) Application For The Naturalization Process: Form-N-400

Adult applicants must meet the necessary qualifications to become a naturalized citizen. Once you have determined that you meet the requirements for naturalization, you may proceed with the application Form N-400, Application for Naturalization. Instructions and the appropriate fees for filing can be found on the USCIS website. The process can be complicated, and the assistance of a qualified immigration lawyer can make sure the application is submitted correctly and documentation is provided in the right format.

Applications may be completed either online or by mail. Candidates who fit the following categories may not complete the application online. These categories are:

If you are submitting Form N-400 by mail, the addresses to send the applications are listed by the state of residency and can be found on the USCIS website at https://www.uscis.gov/n-400.

You will need to appear on time at the designated location for your appointment. Bring your Form-551, Permanent Resident Card, to the appointment. You’ll also need to bring your driver’s license or passport with your photograph.

You will also receive a study booklet to help prepare for the civics test you’ll eventually be required to take.

Filing online may be an option for you. If you do file online rather than by mail or on paper, you can create an account that allows you or your attorney to:

(7) You Can Check Your Case Status After You File

At any time after your application to become a naturalized citizen has been received, you may check the status of your case online. The speed of the process depends on the USCIS’s current caseload. You do need to know that the process could take months.

After you have received confirmation of your naturalized citizen application, you will receive a unique, 13-character identifier that allows you to track the progress of your case. Also, you may update any information such as change of address, email or other pertinent personal data.

When you create an account, you can see the last action taken on your file. You can also see a list of the remaining things you must do to become a naturalized citizen. The site will also allow you to submit inquiries.

Your attorney can access the site to check your case status on your behalf, too, as long as you provide him or her with your 13-character identifier and login information.

(8) USCIS Interviews And The English And Civics Tests

After you have submitted the application and fees, you will be contacted for an interview and schedule testing for your proficiency in English and government affairs. USCIS provides a video to view an example of the interview process and information to help prepare for the tests. Arrive on time with the following documents: 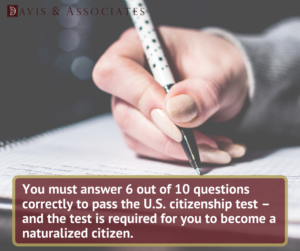 Be prepared to give honest and straightforward answers to questions asked by the interviewer. Your certified immigration lawyer can assist by explaining the potential traps and pitfalls of the process.

Most applicants will be tested in English to show the USCIS official that they can speak and understand the language. They’ll also be tested in civics, which includes questions on American history and how the U.S. government operates. You must answer 6 out of 10 questions correctly to pass the U.S. citizenship test – and the test is required for you to become a naturalized citizen.

Note: Civics studies teach the naturalization candidate how the government works, representation and voting, as well as the responsibilities of local, state, and national government leaders.

Following the interview and testing, you will be advised of whether you passed or not. Officials may ask you to supply additional information before making their decision.

If you have passed all phases of the application process, you will be notified of your official Naturalization Ceremony with a Form N-445 that will advise you of a date, time, and location of the ceremony and Oath of Allegiance. Once you arrive, you will:

You won’t officially become a naturalized citizen until after you’ve taken the Oath of Allegiance to the United States. You’ll receive your naturalization certificate after your oath ceremony.

(10) Rights And Responsibilities Of All United States Citizens

Upon receiving your Certificate of Naturalization, you are entitled to:

The USCIS recommends waiting at least 10 days to contact the Social Security Administration to ensure the notice of your citizenship has been added to the record.

When you’re a naturalized citizen, you’ll have the exact same rights and responsibilities that all other U.S. citizens have.

The dream of many immigrants, refugees, and asylum seekers who have come to the United States to live and work is to become a naturalized citizen eventually. While the path to citizenship is not quick and easy, citizenship through naturalization is undoubtedly attainable given the millions who have completed the journey.

The process to become a naturalized citizen of the United States can be a long and complicated journey. Many of those who have been denied or delayed citizenship submitted poorly prepared documentation or may have had questionable legal barriers.

The best course to ensure your application for naturalization is well presented is to work with an experienced immigration lawyer.

Davis & Associates attorneys and staff will work closely with you during the process of becoming a naturalized citizen. They may even assist you with information to help with the preparation for the citizenship exam, to ensure that you are as prepared as possible.

In today’s political climate, seeking immigration, residency, and naturalized citizenship is becoming more challenging, and professional legal help is essential to achieve the goals of the client.

Scheduling a free, first-time consultation with Davis & Associates will help you to understand all of the responsibilities and requirements of attaining U.S. citizenship. You will also learn the benefits of working with a professional immigration lawyer when applying for naturalization. An experienced immigration law firm like Davis & Associates in Dallas can ease the stress of applying for citizenship by:

For more information regarding residency and naturalization issues, reference the group of articles that Davis & Associates have posted as an immigration resource.

Call today for a free consultation or fill out the brief form on the Davis & Associates website. A representative will contact you to schedule your free consultation to discuss becoming a naturalized citizen of the United States.