As of right now, the Deferred Action for Childhood Arrivals program is still alive – but like other Texas immigration attorneys, we can’t predict its future. However, if you used the program in the past, you may need to go through the DACA renewal process.

Under President Barack Obama, the U.S. initiated the original DACA program in 2012. The program was designed to provide a two-year deferment from deportation actions while providing eligibility for a work permit – and it helped hundreds of thousands of young people who came to the United States as children.

However, in 2017, under a different presidential administration, the U.S. government ended the DACA program. The change negatively impacted those same young people – and it left many unsure about what to do next. Federal courts then stepped in and revived the program, ordering USCIS to continue processing DACA renewals. The U.S. Supreme Court then blocked the administration’s attempt to end the program in a 5-4 ruling. The Supreme Court’s ruling maintained the program and allowed DACA recipients to renew membership in the program.

Who Can File For DACA Renewal?

Not everyone qualifies for DACA renewal. You can only request a renewal of DACA if you met the requirements in the initial 2012 DACA guidelines and you:

Can You Apply for DACA if You Have Never Been Part of the Program Before?

U.S. Citizenship and Immigration Services is accepting new applications for the DACA program. The agency is acting under an order from a U.S. District Court effective December 7, 2020, which requires USCIS to:

What is Advance Parole? 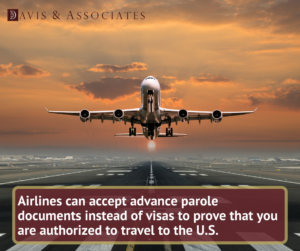 For the most part, travel for vacation purposes isn’t a valid basis for advance parole. In fact, USCIS will usually only grant you advance parole if your travel abroad has to do with things like:

Requirements In The Initial 2012 DACA Guidelines

The original DACA guidelines required immigrants to meet these conditions:

What If The Department Of Homeland Security Terminated Your DACA?

If you had DACA but it was cut short by the Department of Homeland Security, you can apply again. However, you’ll still have to submit evidence that proves you meet all the requirements for DACA eligibility.

Criminal convictions can affect your DACA status. If you have been convicted of a felony, a significant misdemeanor or three or more misdemeanors, you cannot be considered for Deferred Action for Childhood Arrivals unless the Department of Homeland Security believes you have exceptional circumstances.

What Are Significant Misdemeanors?

What About Three (or More) Non-Significant Misdemeanors?

It’s important to note that decisions to defer action in any case is an individualized one. That means that significant or non-significant misdemeanors aren’t sole determining factors when it comes to a DHS decision.

How To Apply For DACA Renewal

Many people find it helpful to work with an immigration attorney when it comes to DACA renewal. Although you don’t have to use a lawyer, it’s often beneficial to have someone in your corner – and to have legal advice on what to do next as DACA makes its way toward its uncertain future. 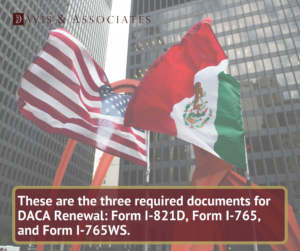 In order to apply for DACA renewal, you and your attorney will complete several forms and submit them to U.S. Citizenship and Immigration Services. These are the three required documents for DACA renewal:

Some of these forms requires additional documentation that you’ll have to include when you file. For example, Form I-765 requires you to submit a copy of your last EAD, if you have one, as well as a copy of your Form I-94 (Nonimmigrant Arrival-Departure Record), two identical passport-style photos, and a copy of a government-issued ID.

Your attorney can guide you through the application process and let you know which forms are required with your DACA renewal application based on your situation.

How Soon Should You Apply For DACA Renewal?

If you want to apply for DACA renewal early because you’re not sure about what the future holds for the program, it’s a good idea to talk to a lawyer first. There are risks and benefits to filing early. For example, when DACA and advance parole were terminated in September 2017, USCIS stopped processing applications it had already accepted and returned application fees that were submitted with them. However, USCIS could still have the option to continue processing applications.

Does DACA Provide a Path to Permanent Residency or Citizenship?

Under President Joe Biden, nearly 11 million DACA recipients may have a path toward permanent residency or citizenship. President Biden signed an executive order to preserve and fortify the DACA program, but his immigration proposal (named the U.S. Citizenship Act of 2021) has not yet been approved by Congress.

How Much Does DACA Renewal Cost?

It costs $495 to file a renewal application with USCIS. If you’re having a hard time getting the funds together, you may be able to apply for a grant.

There are some fee exemptions, but they can be difficult to get. When you request a fee exemption, you must submit a letter and documentation that says:

Do You Need To Talk To An Immigration Attorney About an Initial DACA Application or DACA Renewal?

If you need to talk to a lawyer about DACA renewal or about applying for the program for the first time, we’re here to help. Call us at 972-992-7593 for a free consultation with an experienced immigration attorney right now or view more DACA Information.