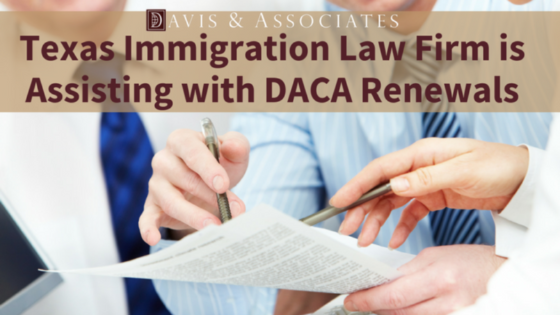 Davis & Associates, a Texas Immigration Law Firm, is continuing to accept clients who are looking to submit a renewal request for Deferred Action for Childhood Arrivals (DACA).

The DACA program was rescinded on Sept. 5, 2017 and protections were set to end on March 5, 2018. This was supposed to force Congress to come up with a permanent legal solution for DACA recipients by the program end date.

As of mid-March, with no decision from Congress and a number of currently pending federal court cases regarding DACA, two district court rulings by federal judges have allowed for the DACA protections to continue, for now.

In February 2018, the U.S Citizenship and Immigration Services (USCIS) announced it would be accepting requests for renewal of deferred action under DACA, on the same terms in place before it was rescinded in September 2017.

Due to this announcement, Davis & Associates is now assisting in DACA renewal requests for:

Those who previously received DACA with protections expiring before Sept. 5, 2016 and those whose DACA grant was previously terminated, may not request DACA as a renewal. However, Davis & Associates can assist these cases by appropriately filing a new initial DACA request on the client’s behalf.

The requirements for filing a new request for DACA include:

If you or a loved one need to file a renewal for deferred action, under DACA, please call our Dallas, Texas Immigration Law Firm at (214) 628-9888 or fill out a contact form for a free immigration law consultation.