It’s pretty well-known that Immigration and Customs Enforcement’s arrested over 42,000 people in Texas last year– and that ICE deportation is on the rise all over the country. But what is deportation, and are there ways you can avoid it?

ICE Deportation: What You Need To Know

Deportation – now called removal – is defined as “the formal removal of an alien from the United States when the alien has been found removable for violating the immigration laws.”

Violating the immigration laws is a pretty broad term, but it basically refers committing crimes, threatening public safety, or violating the terms of a visa.

An immigration judge is the one who ultimately orders deportation, but the entire function is managed by ICE.

In some states, like Texas, the top levels of government are moving forward with aggressive legislation to allow authorities to identify, locate, and detain individuals who may not have proper authorization.

So called “sanctuary cities” that have been safe havens for undocumented immigrants are being threatened with reduced federal and state funding if they continue to release people that the immigration authorities want to be detained.

Deportation seems to be the best solution in the minds of many state and federal officials and legislators. This solution is most likely aimed at individuals who have committed crimes.

Grounds Of Deportability: Reasons ICE Can Deport Someone

ICE must have a reason to deport someone – they’re not legally allowed to toss someone out of the U.S. for no reason. The agency can deport anyone who holds a nonimmigrant visa or who has a green card, provided that person has violated anything in Section 237 of the U.S. Immigration and Nationality Act.

ICE cannot deport U.S. citizens unless they used fraud to get a green card or citizenship. Once a person is naturalized, they’re generally safe from ICE.

Section 237 Of The U.S. Immigration And Nationality Act

Section 237 of the U.S. Immigration and Nationality Act describes the reasons ICE can deport people. Some grounds of deportability include:

This isn’t a complete list – there are several other reasons the government can use to remove you from the U.S. 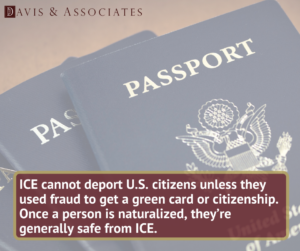 ICE deportation follows a certain process, whether it’s the typical process or expedited removal (see the section “Expedited Removal” below for more information).

When ICE deports someone, the process typically goes this way:

It’s important that you know expedited removal can also be used for individuals who:

If you are removed from the U.S. through expedited removal, you can’t come back to the U.S. for at least 5 years. (In some cases, there are exceptions. You should talk to a Texas immigration attorney if you’ve been barred from the U.S. but want to come here – you could be eligible for a waiver.)

If ICE doesn’t use the expedited removal process on you, the court process begins. You’ll receive a Notice to Appear that lists the reasons the government believes you are violating immigration law. You may get the Notice to Appear from an immigration officer or you might receive it in the mail. You’re supposed to have at least 10 days notice before your court date.

You can be detained if ICE intends to remove you. Typically, detainees are held in immigration detention centers or in a contracted prison.

This option isn’t available to people who have been granted voluntary departure before.

You’ll go before an immigration judge for a bond hearing. It’s like bail – you agree to return to court or you’ll forfeit your bond. If the judge grants you bond and you can pay it, you’re released – if not, you stay in custody.

A master calendar hearing determines how your case will proceed; the judge decides what defense he or she will consider, such as:

You and your attorney can attend the merits hearing, where you’ll present arguments that you should be permitted to stay in the U.S.

You can appeal the judge’s decision, and you can request a delay of deportation until the matter is settled. However, know that appeals can take months – and people sometimes stay incarcerated during the appeal process, even if they’re eligible for bond.

If your appeal is unsuccessful, you’ll be sent back to your home country. If you’re from Mexico, ICE usually flies you to a border city and sends you across a border crossing on foot or in a bus. If you’re from a Central American country or anywhere else, ICE will fly you direct.

Now that you know how stressful and strenuous the deportation process can be, we want to help make sure you can avoid it at all costs.

Therefore, the first and most important way to avoid deportation is to stay out of trouble.

Secondly, you should seek the expert advice of an experienced deportation attorney who may have strategies that can keep your family together and avoid deportation. In Dallas, one immigration law firm, Davis & Associates is committed to protecting the rights of non-citizens with a sincere compassion for keeping families together.

Legal Strategies That May Avoid Deportation

Here are some strategies that may be used to avoid deportation:

Before you and your family face the possibility of deportation, consult with an experienced deportation attorney regarding your situation. Many who felt safe in their environment in the past may feel challenged today under current conditions.

Discuss Your Options: A consultation with a qualified immigration deportation attorney may uncover a strategy that can change the potential for expulsion. If you have stayed out of trouble, worked hard, and have been in the country for several of years, your case should be strong. A deportation attorney may be able to pursue a change of status that can protect you even further.

Someone to Call in an Emergency: If you are challenged by law enforcement, an immigration attorney who is familiar with your situation is essential. Protecting you and your rights as a resident should be their primary mission.

Can You Prevent ICE From Deporting You?

It is sometimes possible to prevent ICE deportation. If you’re like many people, you could benefit from the help of a Houston and Dallas immigration attorney.

Contact Davis & Associates in Dallas for a Free Consultation

Davis & Associates in Dallas and Houston, Texas, is a premier, award-winning immigration law firm. Their mission is to protect the rights of those who hope to remain in the United States to work, live, and succeed.

Phone Davis & Associates at 214.28.9888 or visit their website and blogs relating to immigration matters.