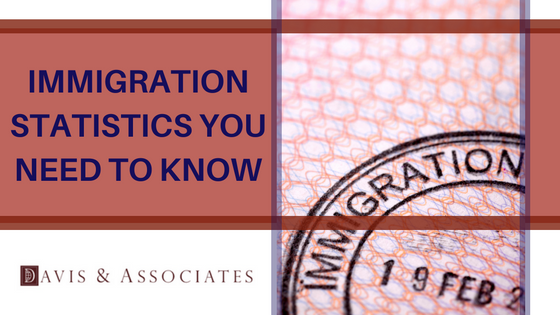 When it comes to immigration in the United States, there is plenty of misinformation in the media. Let’s take a look at some legitimate immigration statistics provided by the Migration Policy Institute.

A Broad View of Immigration in the United States

More than 42 million immigrants reside in the U.S. These individuals consist of immigrants who legally immigrated into the U.S., unauthorized immigrants, naturalized citizens and refugees/asylees.

On a yearly basis, more than one million immigrants make the move to the “land of the free”. In 2014,1.3 million new immigrants arrived. This figure represents about a 10 percent jump from the 1.2 million who arrived in the U.S. the year prior.

When immigration statistics were first tracked in 1850, 2.2 million people entered the U.S. This figure represented about 10 percent of the country’s population. Over the next 70 years, this percentage increased to about 14 percent thanks to the influx of European immigrants arriving on America’s shores. Immigration slowed in the 1920s due to the Great Depression and the passage of laws limiting the number of newcomers.

By 1970, the foreign-born percentage of citizens fell to merely five percent of the population. In the past 45 years, immigration has spiked thanks to the arrival of immigrants from South America, Asia and other nations.

Where do Immigrants Come From?

India is the top importer of immigrants. In 2014, nearly 150,000 Indians found their way to the U.S. Mexico comes in third behind China, with about 130,000 immigrants per year. One of the more shocking statistics concerning immigrants’ home nations is the fact that Canada sends the fourth most people to the U.S. Over 40,000 Canadians arrived in America in 2014. If you are interested in becoming a citizen of the U.S., our immigration law attorneys can help regardless of your nation of origin.

Mexican Immigration to the U.S.

There is plenty of media coverage of Mexican immigration to the U.S. From Donald Trump’s proposed wall to allegations of high crime amongst Mexican immigrants, the spotlight is shining brightly on the passage of people across the southern border of the U.S.

Of the 42.4 million immigrants in the U.S., nearly 30 percent arrived from Mexico. This share of the immigration pool makes Mexicans the largest immigrant group in the U.S. In total, slightly less than 12 million immigrants from Mexico lived in the U.S. as of 2014. In fact, Spanish is the second most common language spoken in U.S. households. About 60 percent of the homes where English is not spoken rely on Spanish for communication.

Though Donald Trump likes to argue that Mexicans don’t “send their best” to the U.S., the truth is that immigrants contribute quite a lot to our nation’s vibrant economy. About 45 percent of immigrants who have entered the country since 2010 are college-educated. In 2014, 29 percent of all U.S. immigrants age 25 and older had a four-year college degree or an advanced degree. This is quite the surprising statistic, especially when one learns that merely 30 percent of the adults born in the U.S. have obtained the same educational qualification.

Most immigrants arrive in the U.S. with a desire to work. Immigrants represent about 17 percent of the U.S. workforce. Immigrants’ percentage-share of the country’s workforce has tripled since 1970.  More than 25 million U.S. immigrants are employed. About one-third of these individuals work in management or other professional roles. This statistic is extremely important as it reflects the fact that immigrants really do contribute significantly to the U.S. economy. Though blue-collar work is important, the fact that a considerable percentage of immigrants serve in management and professional roles is a testament to their true value to the nation.