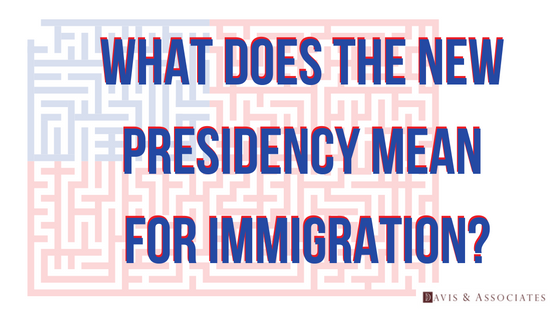 Much has been made of Donald Trump’s plans for immigration. The media would like you to believe Trump is anti-immigrant in every possible way. Let’s take a look at exactly what Trump has in mind for current immigrants living in the United States and those who would like to move to the “land of the free”.

It is no secret that Trump would like to construct a wall that separates the United States from Mexico. He also desires that Mexico pay for the wall’s construction. In reality, it is highly unlikely that the Mexican government will agree to pay for such a gigantic wall. According to Politico, the construction of this wall would cost more than $5 billion. Furthermore, the policing of such a wall would cost an additional $750 million per year. When all is said and done, the odds of such an expensive wall actually being constructed are quite low.

Though Trump has stated he would like to screen immigrants from parts of the world where terrorism is commonplace, the truth is that many of these immigrants are actually political refugees. The bottom line is that a considerable portion of those seeking U.S. citizenship are attempting to escape the wrath of the same terrorists the United States fears.

Trump might temporarily suspend the visas of immigrants until in-depth screening can occur. However, it would prove quite difficult to put an end to the immigration of all political refugees, especially from war-torn places like Syria. If you have any political motivation for leaving your home country or believe you deserve to live in the United States for another reason, our immigration law firm can help make your dream come true.

Trump is adamant that immigrants who are convicted of crimes should be deported. It is not clear as to whether the fate of such immigrants would be determined by an immigration court and which crimes would constitute grounds for deportation. The statistics on immigrant crime are often exaggerated due to the fact that immigration cases are adjudicated in federal court. As a result, federal crime statistics pertaining to immigrants are misrepresented in a negative light.

An End to “Catch-And-Release”

Trump’s immigration plan calls for those who are caught illegally sneaking into the United States to be held and eventually deported. However, it is not clear if this policy will also apply to political refugees.

Trump would like immigrants’ home countries to accept them upon deportation from the United States. This desire might not actually be fulfilled. It is certainly possible that immigrants will be accepted in the United States if their home nations are unwilling to “take them back” as the Trump plan states.

An End to Sanctuary Cities

Trump’s immigration plan calls for an elimination of the “jobs and benefits magnet” that allegedly draws the interest of immigrants. Trump believes eliminating these opportunities for illegal immigrants will improve the country’s economy for those who legally reside in the nation.

Trump would like to increase the number of Immigration and Customs Enforcement agents to three times the current level. He would also like to put an end to Obama’s Deferred Action for Parents of Americans, Deferred Action for Childhood Arrivals and executive actions. Even if Trump follows through on these promises, it does not mean that all immigration will end.

Though technology has improved at a remarkably fast pace, Trump’s desire to institute a biometric visa tracking system for immigrants who enter/exit the country seems somewhat unrealistic. Trump would like such a system at each land, sea and air port. The cost of creating and maintaining such a system combined with its invasive nature might prove to be overly burdensome for all parties involved.

One of Trump’s ways to “make America great again” is to reform legal immigration so it returns to previous levels. However, it is likely that political refugees and other categories of immigrants will still be able to enter the United States. The truth is that many immigrants have the skills and intellect to advance America’s interests.

There is Hope for “Dreamers”

In the end, many of Trump’s immigration stances will require the support of Congress. Only a handful of these ideas can be enforced by Trump himself. This is precisely why prospective immigrants should not give up on their dream of becoming an American.