A proposed rule that U.S. Citizenship and Immigration Services filed in mid-November could prevent some asylum seekers from obtaining work authorization in the United States. The rule, which is currently open for public comment, would affect thousands of asylum seekers who unlawfully crossed the U.S. border and need work permits to earn money while their cases go through immigration courts.

The asylum process can take months – and in some cases, even years – which means immigrants who unlawfully crossed the border would not be legally eligible to work in the United States. As it stands now, asylum seekers must wait 150 days after filing a petition to apply for a work permit. Under the proposed rule, asylum seekers would have to wait 365 days before applying for a work permit. For most people, this time period is absolutely unsustainable; the proposed rule could make applying for asylum, which is provided for in the United States Immigration and Nationality Act, an impossibility.

To be clear, you have up to one year to apply for asylum after you arrive in the U.S., regardless of how you came into the country.

What USCIS Says About the Proposed Work Authorization Rule 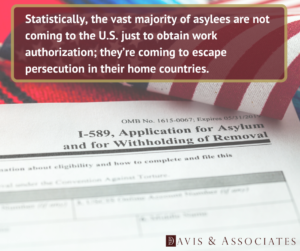 Acting USCIS Director Ken Cuccinelli released a statement that said, “These proposed reforms are designed to restore integrity to the asylum system and lessen the incentive to file an asylum application for the primary purpose of obtaining work authorization.”

However, if the rule is approved, it will affect all asylum seekers except those who have enough money to live on for a year. Statistically, the vast majority of asylees are not coming to the U.S. just to obtain work authorization; they’re coming to escape persecution in their home countries.

Many critics of this proposed rule say that it’s just a tool to prevent people from seeking shelter in the United States. Anyone who comes to the United States has a year to apply for asylum, even if he or she crossed the border without authorization – but the rule extending the waiting period for a work permit to 365 days will affect all asylum-seekers who present themselves at a border crossing or to an immigration official.

Do You Need to Talk to an Attorney About Asylum?

If you need to talk to an immigration lawyer about asylum – or, if you’re outside of the United States at this time, refugee status – we may be able to help you. Call us today to schedule your free consultation.