Deportation proceedings can be incredibly confusing – and because you have no idea how an immigration judge will rule, they’re often scary, too. For most people, it makes sense to work with a deportation defense attorney who can help.

There are several reasons that the U.S. government can use to deport someone who’s lawfully present in the country. Generally, a person is deportable from the United States if he or she:

There are several other reasons the U.S. government may choose to deport someone, as well, so if you’re facing removal proceedings, it’s typically best to talk to an attorney as soon as possible. 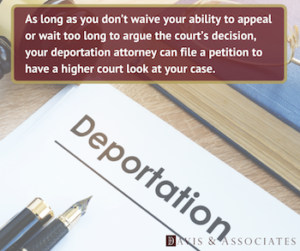 Unfortunately, there’s no way to predict how an immigration judge will rule in a case – but the good news is that if the judge in your case makes a decision you don’t agree with, you may be able to appeal it. As long as you don’t waive your ability to appeal or wait too long to argue the court’s decision, your deportation attorney can file a petition to have a higher court look at your case. Sometimes, the higher court reverses the immigration judge’s decision.

Could You Be Eligible for Cancellation of Removal?

If you’re a lawful permanent resident of the U.S., you could be eligible for cancellation of removal. That means you could ask the court for relief from deportation proceedings and to allow you to keep your green card. However, not everyone is eligible for cancellation of removal. You must have been an LPR in the U.S. for at least 5 years and have continually resided in the U.S. for at least 7 years after being admitted. You must not have been convicted of an aggravated felony, and you must not have received a cancellation of removal in the past. With your attorney’s help, you must also prove that you deserve to win your case and hang on to your green card.

Do You Need to Talk to a Lawyer About Deportation Defense?

If you’re facing removal proceedings, there’s hope – and we may be able to help you. Call us today to schedule a free consultation with a deportation defense attorney who can answer your questions and help you start moving forward.