The intricate nature of the United States (U.S.) immigration system can be deeply overwhelming. Despite this, hundreds of thousands must navigate such processes every year. To make matters worse, immigration courts face crushing case backlogs that can delay proceedings for months or even years. Currently, as a result of President Trump’s government shutdown, courts are experiencing sky-high backlogs. These record-high caseload delays only worsened during the 35-day standstill, which shuttered courts and furloughed immigration judges and their staff. In fact, The Associated Press reports that it will likely take years for immigration courts to make up for cancellations caused by the shutdown.

For people facing arduous battles in immigration court, long wait times and complicated application processes can cause frustration. Additionally, necessary documents and paperwork require attention to detail – there is little margin for error. In immigration court, errors or mistakes can sometimes mean the difference between a successful outcome and a denial. Certainly, innocent mistakes or errors can cause unwanted delays throughout an already lengthy process. Unfortunately, those without adequate legal counsel lack a crucial ally in their fight to live and work in America.

Immigration attorneys provide critical guidance, expertise, and representation for immigrants across the country. And, perhaps unsurprisingly, those who have adequate legal representation fare far better in immigration proceedings than those who do not have a attorney. This is because immigration lawyers profoundly understand U.S. court systems and the nuance of law. This allows them to consider all available legal avenues and ensure their clients receive fair consideration. Further, proper legal counsel will safeguard their clients by submitting required evidence and documents in a timely manner, avoiding errors and delays.

In 2015, Eagly & Shafer published their sweeping study of immigration courts and attorney benefits, titled A National Study of Access to Counsel in Immigration Court. The report examines immigration court deportation case data from 2007-2012 surrounding both immigrants’ access to legal counsel and the benefits of such representation. This article reviews the results of Eagly & Shafer’s impressive work, concentrating on the specific benefits of expert legal counsel.

According to Eagly & Shafer, immigration data from removal proceedings highlight an interesting and unsurprising trend – those with immigration lawyers were more likely to experience successful court outcomes and decisions. In fact, those with legal representation were twice as likely to receive their desired ruling, when compared to unrepresented peers. Figure 1 (below) illustrates the percentage of those receiving desired deportation relief, comparing those with and without legal counsel. 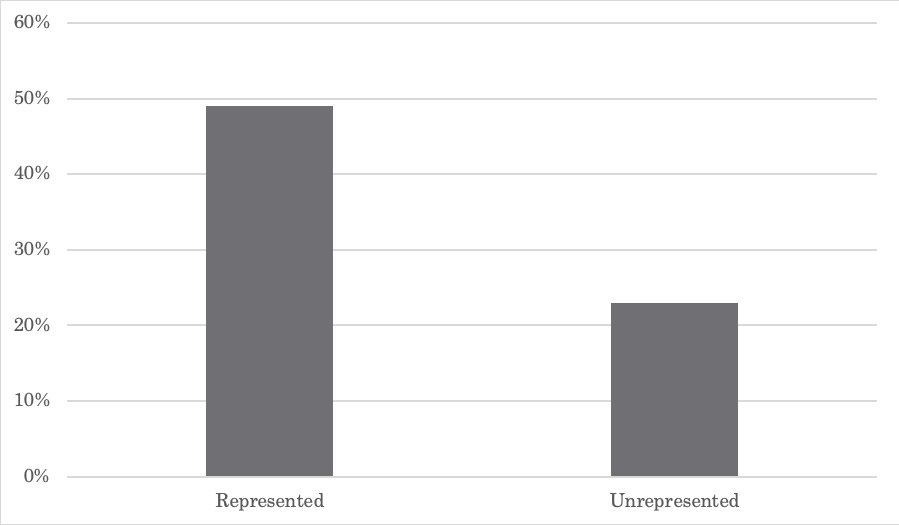 Further, those with appropriate legal help were more likely to apply for some type of relief from deportation. This is likely because attorneys are far more familiar with the options available to immigrants. The difference is striking – for detained immigrants, those with counsel were eleven times more likely to seek relief from removal, including options like adjustment of status and asylum. And those immigrants who were never detained were five times more likely than their peers to seek similar deportation relief options. Eagly & Shafer’s findings highlight the critical role of immigration lawyers.

Next, Eagly & Shafer found that represented immigrants also experience an easier court process in general. For example, they were more likely to both receive a custody hearing and be released from detention. According to the report, only 18% of detained immigrants received a custody hearing. Considering the consequences of detainment – for both a person’s life and livelihood as well as their legal opportunities – achieving freedom is priceless.

Finally, access to counsel was “strongly associated with immigrants coming to court.” Represented immigrants were less likely to miss assigned court dates, avoiding removal in absentia. According to Eagly & Shafer, roughly 90% of unrepresented immigrants receiving deportation orders were removed in absentia, compared with 29% of represented defendants. This not only benefits individuals, but the entire system – when immigrants come to court, the process becomes more efficient and fair.

While any immigrant facing immigration court has the right to an attorney, the U.S. government will not provide one. This means that many immigrants are incapable of finding an attorney, even with many pro bono services available across the country. According to Eagly & Shafer’s analysis, only 37% of immigrants nationwide were able to secure representation in deportation proceedings. This figure includes those immigrants in government detainment. In fact, detainees were the least likely to gain legal counsel – only 14% worked with a lawyer according to Eagly & Shafer.

Access to legal counsel also varied widely based on geographical location. Those immigrants located in larger cities were significantly more likely to attain legal representation. In fact, those in smaller cities or rural areas were four times less likely to find proper legal assistance. This disparity highlights unfortunate issues with the U.S. immigration court system – access to support and legal representation depends on location, as well as other factors.

Finally, Eagly & Shafer found that immigrants’ access to appropriate representation depended upon their nationality. For example, Mexican nationals had both the highest detention rate (about 78%) and the lowest representation rate (21%). On the contrary, Chinese immigrants were to most likely to have representation (92%) and also the least likely to be detained (4%). These data, like those highlighting disparities in access due to detainment status and geographical location, argue that serious structural issues exist within the U.S. immigration detention and court system.

The stress of immigration court proceedings can occasionally feel insurmountable. Cases commonly take months or even years to resolve, leaving families and careers waiting in the balance. Skilled immigration attorneys can lessen the burden of immigration court and provide valuable guidance and protection for their clients. Remember, avoid scams and heartbreak – only work with lawyers certified by your state’s bar association. Avoid anyone who is not appropriately licensed or promises specific outcomes.

If you or a loved one are facing any type of immigration court proceedings, talk to an immigration lawyer immediately. Davis & Associates specializes in immigration law, providing top-tier legal services and solutions to clients across Texas. Schedule a free initial consultation today and meet with one of our attorneys at our Dallas location. Let an expert lead the way.

Eagly & Shafer originally published their impressive report, A National Study of Access to Counsel in Immigration Court, in the University of Pennsylvania Law Review. Later, in 2016, they authored and published a special report for the American Immigration Council (AIC). This second report is easier to read and more accessible to the general public, opening up their findings to a wider audience. Throughout this article, we link to the special report because of its accessibility. All data and findings discussed throughout this article, unless otherwise cited, are sourced from Eagly & Shafer’s work. For ease of access, we’ve provided links to both versions below.