The DREAM Act, if enacted, would permanently protect certain immigrants who arrived in the United States as children but are now adults – and are therefore vulnerable to deportation. The DREAM Act has quite a history in Congress (more on that later), but as of this writing, there are two versions of the original act: the Dream Act of 2021 and the Dream and Promise Act of 2021.

5 Controversial Elements of the DREAM Act

Some people find these elements of the DREAM Act to be controversial:

Each of these questions are regularly argued among politicians. In fact, the Deferred Action for Childhood Arrivals has been controversial since its inception in 2012, with most of the controversy coming in along political party lines.

The vast majority of Americans (74 percent) favor legal status for people who were brought to the United States unlawfully as minors – it’s generally just the politicians who disagree. The most important elements of the act involve:

Although you may not find any of those things controversial – most people don’t – there have been major disputes over them in Congress since the DREAM Act was introduced (and then again when DACA was introduced).

The DREAM Act debate has been present in the United States Congress since 2001. While considered bipartisan legislature, Congress titled the legislation the Development, Relief, and Education of Alien Minors (hence the title DREAM).

The bill has been discussed, proposed, and reintroduced several times, but it has never achieved the required 60 percent support in the U.S. Senate to become law. The debate continues.

In 2012, President Barack Obama introduced a policy known as Deferred Action for Childhood Arrivals, or DACA. This action allowed approximately 800,000 undocumented aliens who had come into the United States as children to avoid deportation. These individuals are permitted to legally work, attend school, and join the military as long as they commit no crimes. They may renew their DACA status every two years.

In September 2017, the Trump Administration announced that it would end the DACA policy in six months if Congress did not institute a permanent solution.

In January 2018, a federal judge ruled that the Trump Administration’s reverse of the DACA policy was vague and unenforceable. This action is believed to allow individuals with current DACA permits to renew in the meantime.

As a result, on January 15, 2018, the administration announced that existing DACA applicants would be able to renew. However, at that time, it also prevented new applicants from participating in the program.

This happened despite the fact that members of both political parties supported consideration for allowing DREAMers to remain in the country under certain conditions.

In December 2020, a U.S. district court in the Eastern District of New York ordered U.S. Citizenship and Immigration Services to accept initial DACA applications (those that come from first-time applicants), DACA renewal requests, and applications of advance parole from DACA recipients. USCIS extended deferred action for many people and extended employment authorization documents, as well.

Most recently, on July 16th 2021, a federal judge in Houston declared DACA to be illegal, 9 years after it was first implemented. This decision does not affect current DACA holders or renewals. It just stops USCIS from granting new DACA protections. If you are not currently protected by DACA and are eligble, still apply! USCIS has stated that they are committed to fighting this ruling and new DACA applications could encourage USCIS to continue the fight.

Who Are the DREAMers? 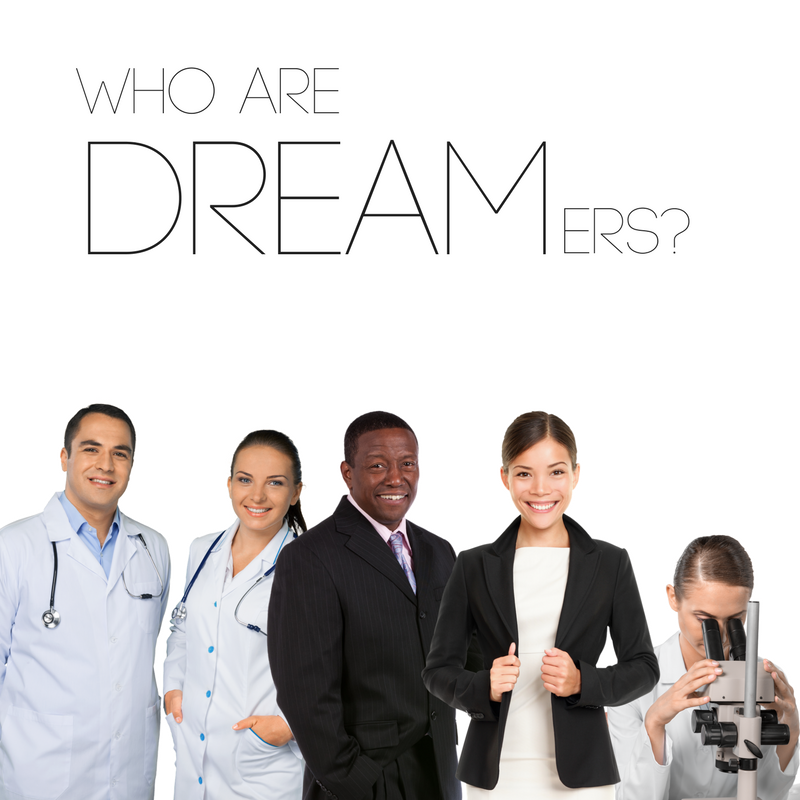 The highest number of individuals are from Mexico, followed by El Salvador, Guatemala and Honduras.

Currently, the program available to help DREAMers is the Deferred Action for Childhood Arrivals program, or DACA. A person may request protection under DACA if they:

What Would The DREAM Act Do?

Once qualified DREAMers are permitted to remain in the United States, they may be granted conditional permanent resident status. At that point, each will be expected to complete high school and at least two years of post-secondary education or trade school or serve on active-duty military status for at least two years.

Some sources estimate the number of individuals in this category to be as many as 2.1 million of an estimated 11 million undocumented immigrants. However, the number may be significantly reduced because those with poor English skills and little or no academic achievement may not qualify.

Addressing the Two Bills in Congress

The two different bills – the Dream Act of 2021 and the Dream and Promise Act of 2021, would offer different types of protection, which are outlined in the chart below.

The path to legal residency for DREAMers remains uncertain. In spite of support from legislators of both political parties, Congress may still not have enough votes to pass either DREAM Act in the coming months.

The best advice is to consult with an immigration lawyer regarding alternatives. Other remedies to continue your residency legally may be available.

An experienced and award-winning immigration law firm like Davis & Associates in Dallas stays on top of all developments in the field and offers a free initial consultation to discuss your situation.