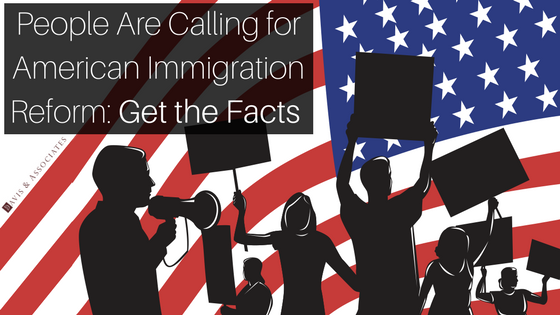 Conversations regarding immigration reform did not begin with the 2016 presidential campaign, although the topic has reached a crescendo level in recent months. The Obama administration began calling attention to a need for reform as early as 2008. However, to date, there has been no legislation initiated by Congress that has achieved sufficient support.

The challenge to enacting immigration reform today is that two factions view the situation from entirely different perspectives. One hopes to pass legislation that is more restrictive while the other side wants laws that are more receptive to immigration and residency.

President Trump has been very vocal about restricting the influx of immigrants by emphasizing that often these individuals are stealing good jobs from hard-working American-born citizens and are a major contributor to the nation’s crime rate. Sympathy for this position was ignited during the 2009 recession when many Americans lost their jobs. While employment has substantially improved over the past years, the attitude toward minimizing immigration persists among many Americans and their legislative representatives.

Other individuals and legislators believe that the economic development and success of the United States was built by the contributions of hard working immigrants during the past four centuries. Immigrants from Latin America, Africa, and Asia, along with millions of Europeans, have arrived here and contributed to creating some of the great monuments of American industry. These monuments include the intercontinental railroad, infrastructure, and even government landmarks in Washington D.C., most notably the White House.

One group views immigrants as: 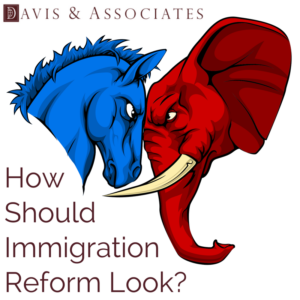 Others see immigrants as:

Since there has been some validation to both sets of beliefs, immigration reform will likely be a complicated problem to resolve.

The most tangible symbol of oncoming American immigration reform attitudes today is the debate over the current president’s campaign promise of a high wall across the nearly 2,000-mile border between the United States and Mexico. While the proposed wall is still being debated and is, as yet, unfunded, the controversy brings some clarity to the current administration’s commitment to reducing immigration.

How Should American Immigration Reform Look?

To former President Obama, after some failed attempts at immigration legislation, immigration reform resulted in  executive action that would, according to a November 2014 USA Today article:

Under President Trump, no concrete immigration reform has been formalized. Indications are that any plan he supports would be highly restrictive, touting the safety and protection of quality jobs for Americans. In January of 2017, the president issued an executive order that restricted travel of individuals from seven mostly Muslim countries while halting all immigration for a period to review security procedures. While U.S. Courts have largely diluted the original order, an attitude toward restrictive immigration is evident.

According to a New York Times article from August 2017, the president supports a measure that cuts U.S. immigration by 50% by restricting the ability of U.S. citizens and legal residents (green card holders) from bringing in members of their family. Denying the entry of spouses and children would, some critics say, cause many skilled, tax paying workers to leave.

Recent or long-standing immigrants should consult a qualified immigration law firm to understand their rights in the current changing environment. Stay abreast of current immigration news by visiting Davis & Associates ongoing news and blogs that may pertain to your personal situation.

In Dallas and North Texas, contact Davis & Associates for a free consultation to discuss your situation and American immigration reform in detail. Immigration enforcement and legislation in Texas are changing, and your rights may be threatened. Davis & Associates’ multi-lingual staff stays current with all activities surrounding American immigration reform, visas, residency, and citizenship.