Obtaining a green card, which signifies your lawful permanent residence in the United States, comes with a number of benefits. It’s not the right choice for everyone, though.

With a green card, you can live or work anywhere in the United States. You’re allowed to change jobs as often as you’d like (or not have a job at all), and you can move from state to state without restriction. A green card is also the last step on the path to U.S. citizenship. Check out this guide to the pros and cons of obtaining a green card in the United States so you can make the right decision for your future.

Obtaining a Green Card in the United States

Although green card holders are not citizens, they may live and work in the country indefinitely. Learn about some of the benefits and drawbacks of green cards so you can make a decision that’s right for your future.

The Benefits of a Green Card

Green card holders, also known as lawful permanent residents, enjoy benefits that visa holders do not receive, including the following.

In addition to being granted these rights, green card holders are also expected to uphold their responsibilities, including the following:

The Drawbacks to a Green Card 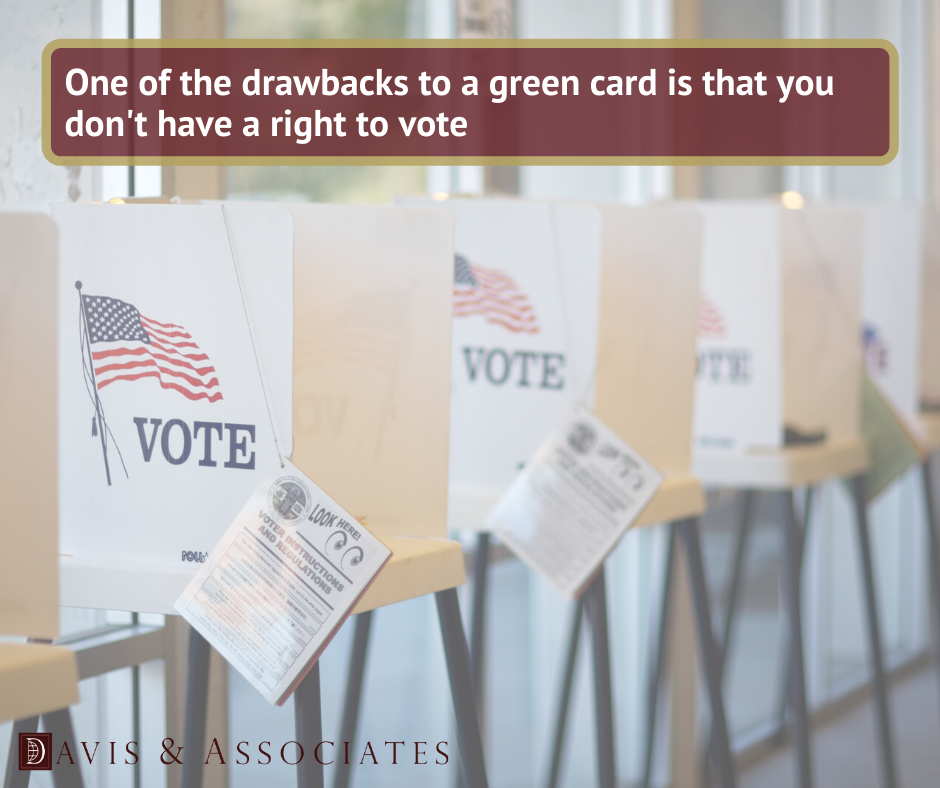 One of the few drawbacks to being a green card holder is that you do not have the full rights and responsibilities of a U.S. citizen, which include the following:

Although these aren’t necessarily drawbacks, they are things that you can only do if you take the next step and become a naturalized U.S. citizen. You cannot do any of these things with a green card.

In order to apply for a green card, you must meet certain eligibility requirements. Typically, most immigrants receive a green card through family or through employment. You can also obtain a green card as the victim of abuse, as a special immigrant, through registry, or through refugee or asylum status.

The following are the main eligibility requirements to obtain a green card: 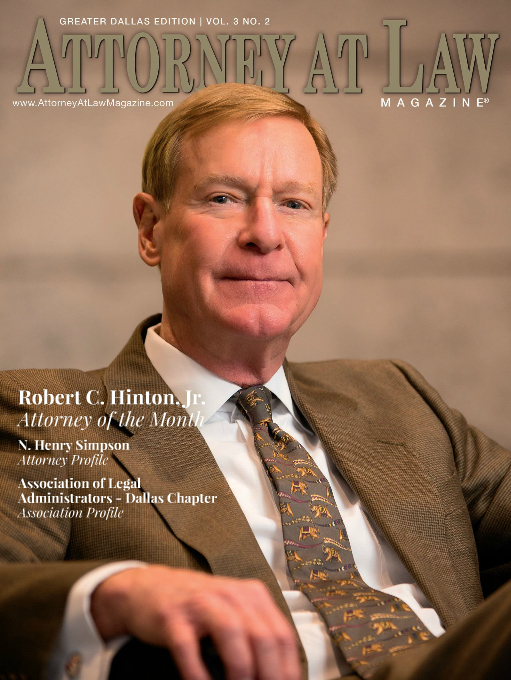 Who Cannot Obtain a Green Card?

People often ask me how difficult it is to obtain a green card. In typical lawyer fashion, I generally answer, ‘It depends.’

For someone with a significant criminal record or a string of deportations on his or her record, it will be near impossible for that person to obtain a green card.

For someone who entered the United States legally, has never had any issues with law enforcement and has always maintained a perfect immigration record, it would not be as challenging. Many of my clients are somewhere in the middle of those extremes.

Green Card With a Criminal Record

The most obvious bar to immigrating to the United States is a criminal record. Not all crimes have immigration consequences, but any encounter with law enforcement will have to be documented before a green card would be granted.

Any drug-related offense, other than one offense for simple possession of 30 grams or less of marijuana, is likely to result in a permanent bar to a green card. 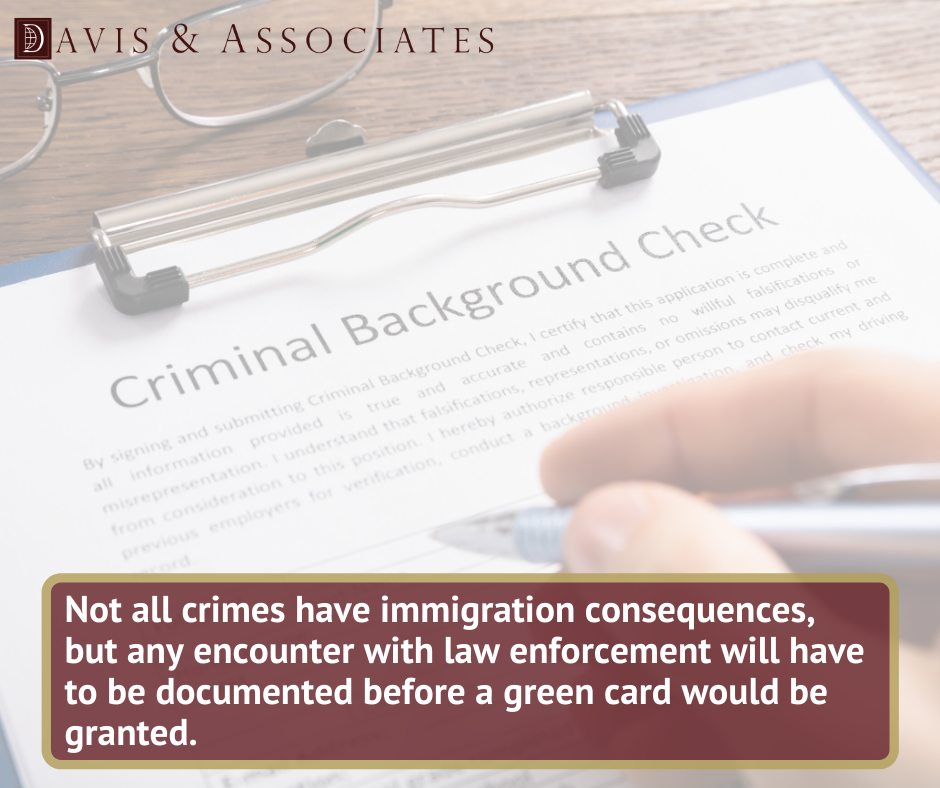 Any offense deemed a “crime involving moral turpitude” may also result in a bar with the exception of a petty offense for a relatively minor misdemeanor.

Other offenses that may result in a bar to obtaining a green card include prostitution, drug and people trafficking.

Non-drug related offenses that do not involve moral turpitude, such as disorderly conduct and strict liability crimes, or crimes of negligence, generally will not have immigration consequences.

Under current law, driving under the influence or while intoxicated generally does not factor into a green card decision.

Also, attempts and conspiracy to commit crimes count as though they were the crimes themselves and potentially carry the same consequences. Finally, a plea of guilty or no contest and punishment are equal to a finding of guilt for immigration consequences, even if the criminal case is ultimately dismissed.

Those who have or whom the government has reason to believe have engaged in terrorist activity are not eligible for immigration benefits. The bar includes any spouse or children of that person. Terrorist activity is defined very broadly and no intent to participate in a terrorist organization or activity is required.

Green Card after Deportation, Fraud or with Medical Problems 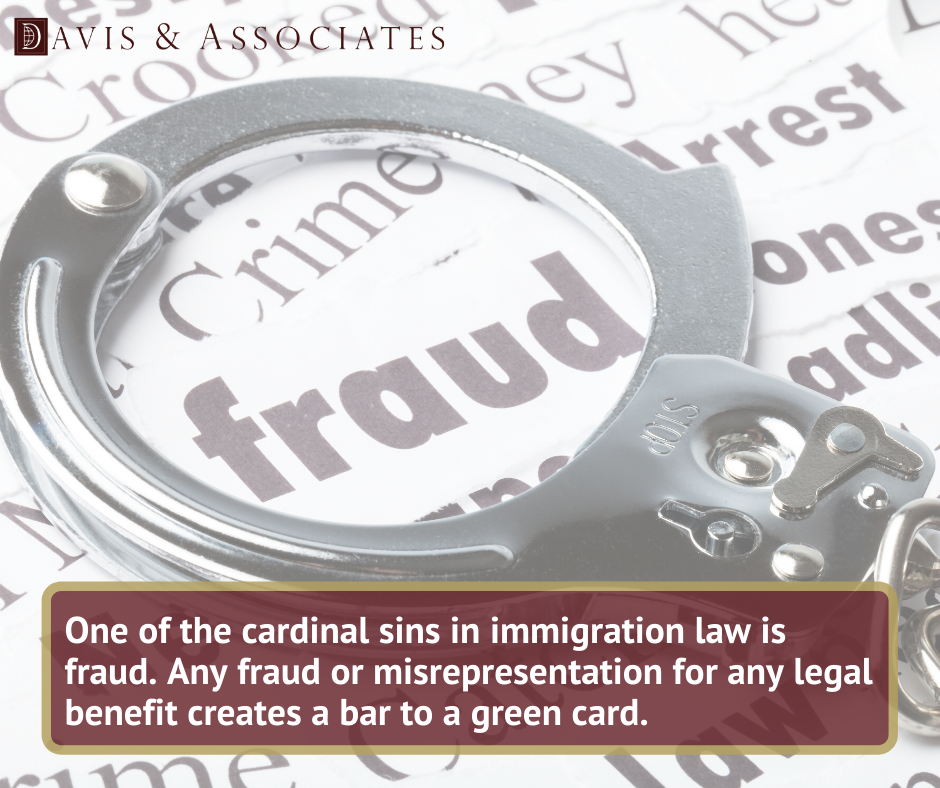 One of the cardinal sins in immigration law is fraud. Everything centers on an applicant’s credibility. Any fraud or misrepresentation for any legal benefit creates a bar to a green card. For someone who makes a false claim to U.S. citizenship for any legal benefit, a lifetime bar is received without waiver.

Certain medical issues can also bar a person from becoming a permanent resident, such as communicable disease, a lack of required vaccinations, drug abuse or addiction, or mental health issues that result in the person being found to be dangerous to others.

For some of these issues, a waiver is available, but not guaranteed to be approved. A waiver is a discretionary application processed by the U.S. Citizenship and Immigration Services. An applicant must establish that failure to grant the applicant permanent residence will result in extreme hardship to qualifying family members.

Taking the Final Step From a Green Card to Naturalized Citizenship

If you have a U.S. green card, you can apply for naturalization. Naturalization is the process of becoming a U.S. citizen, with all the same rights and responsibilities that other U.S. citizens have.

When you become a U.S. citizen, you keep all the benefits you enjoyed under a green card, such as the right to qualify for local tuition at school, make financial contributions to U.S. elections, and travel in and out of the United States more easily. You may also sponsor certain relatives for green cards or visas. However, you gain new benefits, as well. As a naturalized U.S. citizen, you may:

You can become a naturalized U.S. citizen if you:

Many people choose to work with a Dallas or Houston immigration attorney to apply for naturalization. In order to start your petition, you’ll need to gather a series of documents to support your petition. Your attorney can give you the guidance you need to get the process started, and he or she can fill out and file your paperwork for you. For many immigrants, the process of becoming a naturalized citizen is easy. However, U.S. immigration law can be complicated – especially if you have extenuating circumstances – and it may be best for you to work with an experienced attorney who understands the latest developments in immigration law.

There are many reasons and incentives to obtain a green card, either for yourself or for a loved one. At Davis & Associates, our immigration attorneys can help you through the process and ensure everything is filed properly. We understand the significant benefits that come with being a lawful permanent resident, and we want to help you achieve this immigration status. We provide the reliable counsel and compassionate guidance you need to reach this goal.