The lawyers at Davis & Associates explain how getting divorced after receiving a green card can impact a person’s immigration status or their rights and obligations.

Generally, the impact a divorce has on a person’s immigration status depends on what stage of the process that person is in. You’ll have a different outcome if you:

If you divorce your spouse before your application for a green card has been approved by the U.S. government, your immigration process stops. The divorce essentially dissolves the relationship that made you eligible for a green card – and because you and your spouse have split up, you are no longer eligible and cannot continue the process.

Even if USCIS has already approved your immigrant petition, you lose your eligibility for a green card if one has not been issued to you yet.

Does Divorce Affect a Green Card With Conditions?

If you have been married for less than two years and still have conditions on your green card, your immigration process may be affected. You’ll have to file Form I-751 with a waiver for the joint filing requirement – and you’ll have to show U.S. Citizenship and Immigration Services that you entered your marriage in good faith. It can be difficult to prove that you entered the marriage in good faith if you divorce before petitioning the U.S. government to remove the conditions on your green card. For this reason, many people choose to work with a family immigration lawyer who understands the impact a divorce can have on the immigration process at this stage.

Note: During the 90 days prior to the expiration of the green card, the permanent resident must file an application to remove the conditions (Form I-751, Petition to Remove the Conditions on Residence) as well as supplemental evidence to prove the bona fides of the marriage. This application should be filed jointly with the spouse through which the residency was obtained. In cases of divorce, the green card holder cannot file jointly and must file with a waiver request. Your immigration attorney can help you with the waiver request.

The bottom line is that USCIS is always on the lookout for people who obtain green cards fraudulently. Your whole case file will be up for review, and you may need to provide USCIS with evidence that you were engaged in a bona fide marriage – and that you didn’t only marry your spouse so you could gain an immigration benefit. That can be difficult without your former spouse’s cooperation.

What Kind Of Evidence Can You Provide?

If USCIS wants more evidence that you were engaged in a bona fide marriage, your attorney can help you determine what type of evidence will be useful in your case. You may want to share:

Who Can File A Waiver Request Without A Spouse?

USCIS allows some people to file Form I-751 without a spouse’s cooperation – but only if that person requests and is approved for a waiver of the joint filing requirement. You may be able to apply for a waiver if:

You do not have to have suffered battery or abuse at your spouse’s hands to apply for this waiver. It is available to people who are divorced.

It’s important to note that the Form I-751 waiver is only available to conditional residents. If you haven’t gotten a temporary green card through your marriage, you cannot apply for this waiver. You may have an alternate solution, though: You could be eligible to self-petition for a green card by filing Form I-360, which is authorized under the Violence Against Women Act.

Your immigration attorney can give you case-specific legal guidance if this petition applies to your situation – but because every case is different, it’s important that you speak with an immigration lawyer about your divorce and what caused it.

Green card holders are usually unaffected by a divorce when they file another application or petition with U.S. Citizenship and Immigration Services if they are already a lawful permanent resident with a 10-year green card. There is usually no reason for USCIS to reevaluate your petition after a divorce.

In fact, green card holders can change their name on the document at the same time they renew or replace it. (Or they can file to change the name even if the card is still valid and in good condition to have consistent legal documents with their new legal name).

To do this, the green card holder must show legal proof, like a divorce decree, to prove they need to change their name on the green card. This can be done by filling out the name change on Form I-90 and submitting a copy of the legal name change document.

Can You Change Your Name On A Green Card Without Penalties After Divorce?

It’s usually a simple matter to change your name on your green card after a divorce. If you’ve legally changed your name, which will be outlined in your divorce decree, you can simply update your green card by filing Form I-90, Application to Replace Permanent Resident Card. You’ll have to provide some evidence that shows your name change, such as your divorce decree, before USCIS will issue your new green card with your new name.

If you intend to file for naturalization using Form N-400, Application for Naturalization, based on your marriage to a U.S. citizen, a divorce can impact your eligibility. Even if you were married for more than three years, which is the minimum time required, you must continue to be married at the time of your naturalization and you must have lived with your spouse for the three years prior to filing your N-400 application.

What If You’ve Been a Permanent Resident for 5 Years?

Will USCIS Review Your Case During Naturalization If You’ve Divorced? 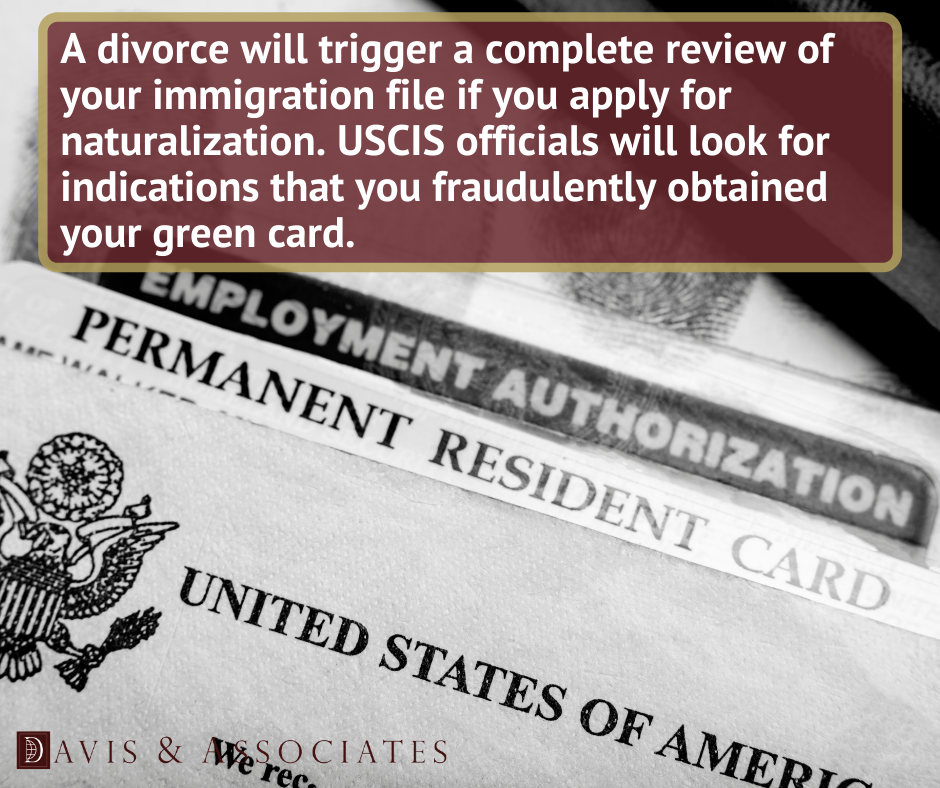 A divorce will trigger a complete review of your immigration file if you apply for naturalization. USCIS officials will look for indications that you fraudulently obtained your green card – and if that happens, you may have to provide additional evidence to support your claim to eligibility.

Generally, USCIS officials will ask a few questions about the marriage during the naturalization interview; in some cases, they ask for additional supporting evidence that proves you were engaged in a bona fide marriage (and that you didn’t only get married to obtain an immigration benefit).

Some of the questions USCIS may ask during a naturalization interview after divorce may be very personal. The USCIS official interviewing you may ask what led to the breakdown of your marriage, who initiated the divorce proceedings or even what your day-to-day life was like during your marriage.

It’s important that you answer honestly and candidly. You should also provide any supporting documentation that the USCIS interviewer asks you to provide quickly to avoid any delays in processing your application.

Other Categories That You May Qualify for a Green Card Under

If you don’t qualify for a green card because you divorced your spouse before your green card was approved by USCIS, you may still qualify under one of the following categories. If you believe you qualify, you may wish to speak with an attorney who can help you.

What Should You Do While Your Green Card Application is Pending?

If you need to leave the U.S. temporarily while your case is pending, talk to your attorney about filing the appropriate forms – you don’t want to put your green card status at risk.