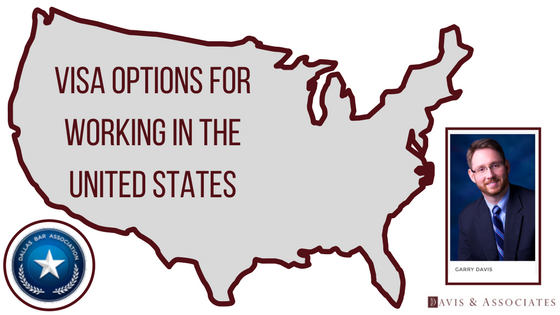 The following article about United States Visa Options was written by Garry Davis, owner and lead attorney at Davis & Associates, and was recently published in the Dallas Bar Association digital and mail publications:

Visa Options for Working in the United States

As an Immigration Law practitioner, I am frequently asked by company owners, foreign national investors, and others who want to work here, “How does someone get a visa to work in the United States?” There are several options available, but each has challenges. This article will provide a brief overview of each visa type that allows the holder to work in the United States, and the main challenge for each.

The most common work visa is H-1B, which is the professional worker visa. To qualify, an H-1B hopeful must have a specific baccalaureate degree or graduate degree. The person also must be sponsored by a company that is offering a position with duties that require that specific degree. If the person does not have a degree or a degree that equates to a United States baccalaureate degree, he or she may still qualify for H-1B through work experience. The sponsoring company must attest that it will pay the person prevailing wage for that position in the geographic area.

The challenge with H-1B is we only have 85,000 visas available each year, which are filed for in April. In 2016, the government received over 200,000 applications for those 85,000 visas. The available visas are allocated through a random lottery selection process, and because of the limited numbers we have to file for the entire year’s applications in April. That means the risk of not getting one, even for someone who meets all of the requirements, is around 30 percent.

Another option is the L-1 visa. This is a visa that allows an international company to transfer a key employee to a United States office of the same company. To be the same company, the offices must either be in a parent/subsidiary relationship, both owned by the same parent company, or have the same ownership. There are two types. The L-1A is for managers and executives. The L-1B is for employees with specialized knowledge. The employee must have worked for an office of the company outside the United States for 12 consecutive months in the past three years to qualify for transfer to a United States office.

For executives and managers in larger companies, the L-1A is relatively straightforward. It becomes more difficult for smaller companies. The government tends to push back on these petitions when the number of employees is small, even though the law does not specifically require a certain number of employees.

The L-1B can be challenging even for larger companies. The requirements to prove specialized knowledge seem to be somewhat subjective in the officer reviewing the application. Generally the government requires the person to have a unique or advanced level of proprietary knowledge of the company’s offerings. This can be very difficult to prove, even for highly technical positions or key developers in a company’s internal systems.

International traders and investors may have an option for an E visa. For a person to have an E visa option, he or she must be a national of a country with which the United States has a treaty specifically allowing for E visas. Notable examples of this option are Pakistan, Canada, Mexico, the United Kingdom, and France. Notable exceptions are China and India.

The term “substantial” is not defined as a specific dollar amount, which leads to a fair amount of subjectivity in the review of the application… continue reading here