Can I Get a Green Card if I Have a Criminal Record?

U.S. Citizenship and Immigration Services checks every applicant’s background. The agency looks for criminal records for the sponsor (the person applying on another person’s behalf) as well as the beneficiary (the person who will receive the immigration benefit if USCIS approves the petition).

Are You Required to Mention Your Criminal History When You Apply for a Green Card?

You are legally required to be truthful on your application, as well as to provide complete information. If you fail to do so, you could be committing immigration fraud. That means you’re required to mention your criminal history on your green card application. You should include:

Even if you were arrested and released, it’s in your best interest to tell USCIS about the incident. In the vast majority of places, arrests that don’t lead to charges remain on a criminal record. You should absolutely share every aspect of your criminal record with USCIS during the green card application process. The only thing you’re not required to mention are minor traffic violations – but you do need to report traffic violations that are also crimes, such as drunk driving, as well as things like reckless driving. Generally, you can leave out minor traffic infractions such as parking tickets and speeding a few miles over the legal limit. If you’re not sure whether you have to mention something to USCIS, err on the side of caution and list it – or consult your Dallas immigration attorney to find out.

What if Your Criminal Record Was Sealed or Expunged?

If your criminal record was sealed or expunged, you still need to explain it to USCIS with your green card application. That’s because many criminal histories still exist (even when a government says they’ve been sealed or expunged), and lying on an immigration form will result in USCIS rejecting your application. That’s true even if the crime you failed to mention would not have made you ineligible.

Related: Do you have to get the COVID-19 vaccination to immigrate to the U.S.? 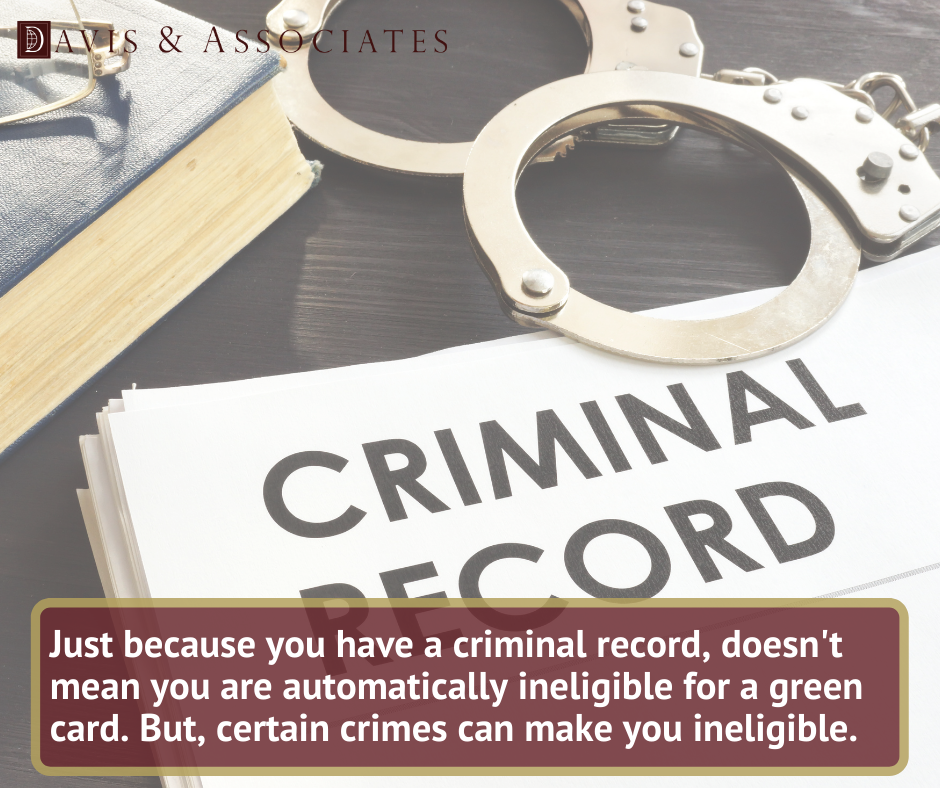 Crimes That Make You Inadmissible to the United States

Crimes of moral turpitude are defined as acts that are “depraved” or “immoral.” Generally, these crimes are serious violations of acceptable norms because they’re committed recklessly or with evil intent. The Board of Immigration Appeals has defined these crimes as those that “shocks the public conscience as being inherently base, vile, or depraved, contrary to the rules of morality and the duties owed between man and man, either one’s fellow man or society in general.”

Crimes of moral turpitude can include things like homicide, rape, fraud, animal abuse and other serious crimes that suggest you’re not a moral person.

Related: How to prepare for an asylum interview

There is one exception, but it’s small: If you were convicted of possession of 30 grams or less of marijuana, and the marijuana was for your own personal use, you may qualify for a drug crime waiver. If the U.S. government gives you the waiver, you can apply for a green card.

With a waiver, that minor drug crime conviction will not prevent you from getting a green card. However, there’s no guarantee that the U.S. government will give you a waiver. Additionally, other circumstances may make you ineligible for a green card.

Arrests and Charges Versus Convictions

Arrests and criminal charges are not the same as criminal convictions – and USCIS recognizes the difference. If you’re arrested for a crime and released without charges, USCIS will not hold it against you; they can’t, because anyone could be arrested at any time. Likewise, if you’re charged with a crime but found not guilty, USCIS takes the court’s word for it that you didn’t commit the crime.

However, a conviction is another story. A conviction in an immigration context means that you were found guilty of committing a crime or that you admitted guilt when you were charged with a crime. The key here is guilt – either a court found that you did it or you admitted to doing it.

What Kinds of Questions Do You Have to Answer About Your Criminal Record?

Your green card application will include questions about your criminal history. Additionally, your green card interview may include questions about your past – and that means you have to answer truthfully and consistently across both. If the USCIS official conducting your interview finds discrepancies between your interview and your application, there’s a good chance that your petition will be denied. You may even be barred from ever obtaining a green card.

If you have anything at all on your criminal record – even things that wouldn’t make you inadmissible to the U.S., such as an arrest for vandalism that you were never convicted of or a shoplifting charge for which you were found not guilty – you need to note them and explain them on your green card application. If you don’t, USCIS will learn about them anyway; then, you can be accused of immigration fraud and your application can be denied.

Do You Need to Talk to an Attorney About Getting a Green Card With a Criminal Record?

Call our office today to schedule a free consultation with an experienced, knowledgeable green card attorney. We can answer your questions and get you started on the right path.